According to Vine (Promotional Flyer)

Create a promotional flyer of your choose! It can be for an event, product, or anything. It can be crazy and colorful or simply and clean. (Promotional Flyer)

This is a flyer for a group student project that I am leading. We are making a documentary web series about Vine video called According to Vine. It should be launching in the next couple of weeks. We are learning to make social media by making social media about social media. The video episodes (3-5 minutes) will be hosted on YouTube and featured on  a WordPress website. We will then use Twitter and Facebook to create interest in the series and allow discussion about it.

This flyer is designed to promote the project and features the three main platforms used in the project and the logo designed for the project by students Annie and Jade. I decided to take a very minimal approach with a balance of the four circular icons arranged in a diamond formation with the web address underneath. The icons were sourced from the web and recoloured in various green tones to reflect the green and white colours used by Vine. The design was created in PowerPoint and exported as a JPG.

The purpose of a light switch is simple, but we fail to notice the canvas behind it: the plate. There’s so much that can be done with the metaphor of a light switch, and there’s even space to do it. That’s your task today. (Light Switch Art)

‘There’s so much that can be done with the metaphor of a light switch’…maybe, but I couldn’t get beyond thinking of the light switch as a kind of beak or nose. An owl immediately came to mind – but a bit boring. Eventually, but I can’t recall when exactly, the idea of a Green Man face with the switch as the nose struck me as being an OK idea. The link of the ‘green’ in Green Man to ‘green’ in relation to ethical issues concerning the enviroment, such as saving energy, must have triggered this association, and so the phrase ‘Be Green, Man’ became a key element of the design.

I began by looking at some images of the Green Man with the idea of using that as basis for my own design. A particualr concern was to think of where to put the text message – underneath the face as a first idea, but then incorporated into the face – probably at the top of the head. The breakthrough moment was when I had the thought of making the Green Man’s face into the shape of a light bulb, a truly ‘light bulb moment’ (lol?). The light bulb shape allowed for a clear space to position the text.

Once the basic design idea was decided, the final design began with the rectangular shape that would be cut out to fit over the switch and forming the bridge of the nose. Next, the eyes, lips, and the foliage that forms hair and facial hair and the stalks making the screw thread of the light bulb fitting. Then, coloured in and cut out, placed in position and photographed.  I think it is a bit of a fun design with a message. I didn’t make a PDF version, because as I began to look at more and more light switches, I realised that there is no standard size, and it seemed like too much effort to address that – so make your own art peeps!

Closing the curtains on Unit 5

Something of a paradox. Unit 5 of the open course ds106 was the unit in which I was most organised and yet it has been a long and drawn out affair. I planned exactly what I needed to do, decided on the assignments, but just couldn’t find the time to complete them and write them up ‘like a champ’. So, finally, time to close the curtains on Unit 5. It was fun, but felt like the unit that would never go away. There were a lot of elements and my determination to complete them all was eventually compromised – but I did most things, and am happy with them.

I’m yet to organise a radio show group, so that is still on the agenda. I have left a few comments on blogs, but will try to do more in the coming weeks. I did link more work on Twitter and I received a few likes and comments on my posts which was good to get. I posted about the tips that I used during this unit and on the shared Google doc. I over-thought and planned the photoblitz task, losing some spontaneity and used a convenient but dull location. But, done. I spiffed up my Flickr such as changing the URL. I think I learned how to embed a Flickr set as a slideshow, but it didn’t seem to work.

I did my minimum three daily creates very early in the completion of this unit – having done my ration, I obviously could have done more. I was very happy with them and the focus on the visual in this unit as a whole. Safe territory, but championship blogging.

Free as the Wind

I chose interesting visual assignments to complete and they confirmed that I have a confidence about my skills and creativity in this area.

Along the way I learned about Gestalt Psychology and it is always good to backfill your knowledge. As a person with a long interest in visual culture such as art and photography, this was a comfortable area for me. But I could start to push my production skills further. I pick up in the ds106ers’ blogs about people using Gimp, so perhaps that would be a good tool to start exploring more. I have been relying on the rather low level ‘dirty’ image manipulation of Microsoft PowerPoint which is a bit of a perverse toy in the area of image manipulation. Now I just need to match my organisation skills to time management and make the plans happen in a more timely way.

At the beginning of Unit 5 of the ds106 open course we were directed to choose three tips to practice during the ‘visual storytelling’ part of the course. I found my guidance via the ‘How to be a better photographer…’ Storify collection of tips from ds106ers. I was drawn to the link provided by Mandi Caffrey on Twitter that suggested knowing about Gestalt Psychology to improve your photography.

Photographer Joe Baraban’s article focuses on six principles of visual perception taken from Gestalt Psychology that he regards as being most relevant to photography. So instead of using three tips, I decided to to double up and use six principles. In choosing this source of advice, I figured that not only would I gain tips about photography, but also learn something about Gestalt Psychology – a concept I had heard of but didn’t know anything about. In a nutshell, this approach to the analysis of visual pereception can be summarised as ‘the whole being greater than the sum of its parts’. In other words, an image can be reduced to its parts, and you can think about different parts of the image making sense when making one, but the overall effect of the photograph exceeds these parts. But knowing about the parts according to structuring principles can allow the photographer to achieve the ‘prime objective to present this visual information in a way that takes control of what the viewer sees when looking at our imagery’.

The aim is to take photographs that viewers will want to spend some time exploring. The secret is having an eye for composition and compositional elements such as the relationship between an object and its surroundings (figure-ground) or ways that the eye can enter or leave the frame (continuance).

Between the algaed stone and the imposing handle

No shortage of benches for lunches

Now peeping on the graveyard

For the ds106 photoblitz exercise, the challenge is to take creative photos from a list of 12 subjects in a 15 minute period in a specific location. Subjects vary from specifc (‘Take a photo dominated by a single color’) to ones open to wider interpretation (‘Take a photo that represents a metaphor for complexity’). A requirement to photo a timepiece at the beginning and end of the task proves in theory the time taken on the exercise, right? 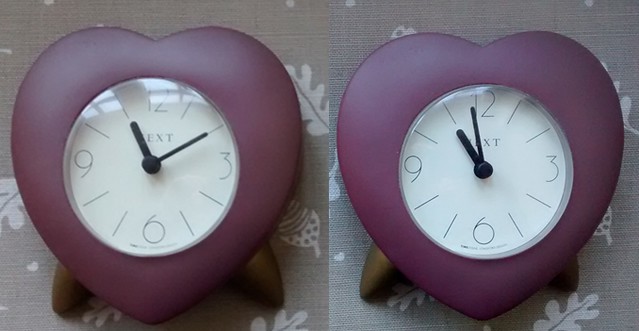 For convenience, I chose my house to do the photoblitz. I wanted to do all the subjects in the time allowed, so I prepared all the shots in my mind before starting – even arranging certain objects in certain places and rehearsing shots. I suspect this is against the rules or at least the spirit of the task, but the process of thinking about a solution to the subjects and framing the shots and so on is exactly the same. A lot of the shots were disappointing – a bit dull or maybe just not as good as they seemed in the planning and the execution. Perhaps also limited by the domestic location. It would be good to do this again in a more dynamic location and with more spontaneity using John Johnston’s mobile web app. I was able to find 5 photos that I thought were interesting enough to be uploaded to Flickr. My favourite image is ‘interesting shadow’ featuring my Philippe Starck fly swatter ‘Dr. Skud’. And making the ‘two things that do not belong together’ was fun (the pico projector and scissors). 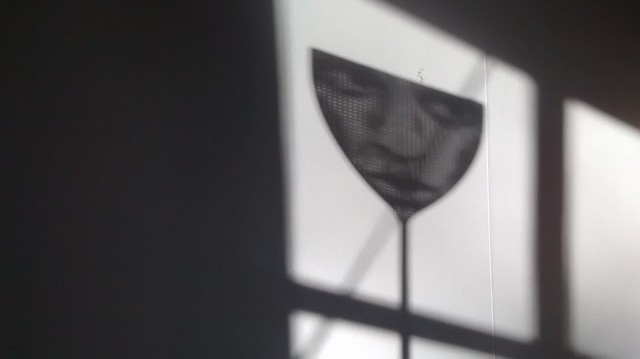 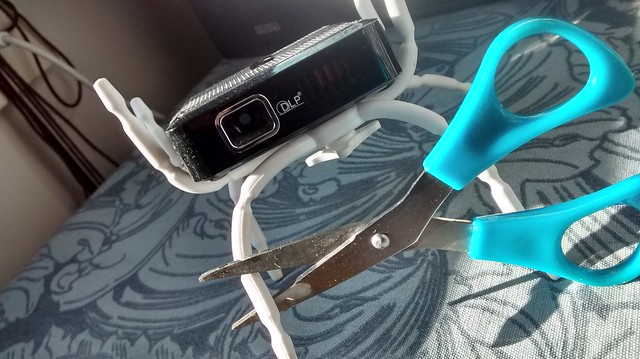 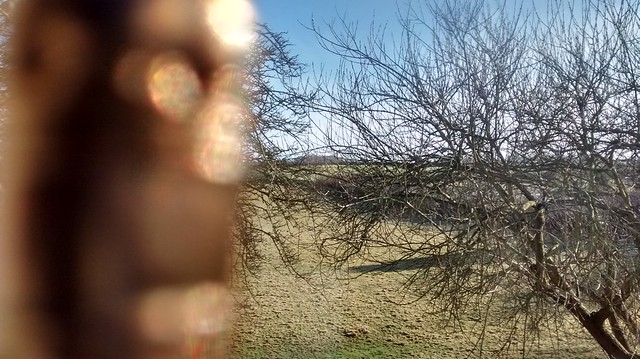 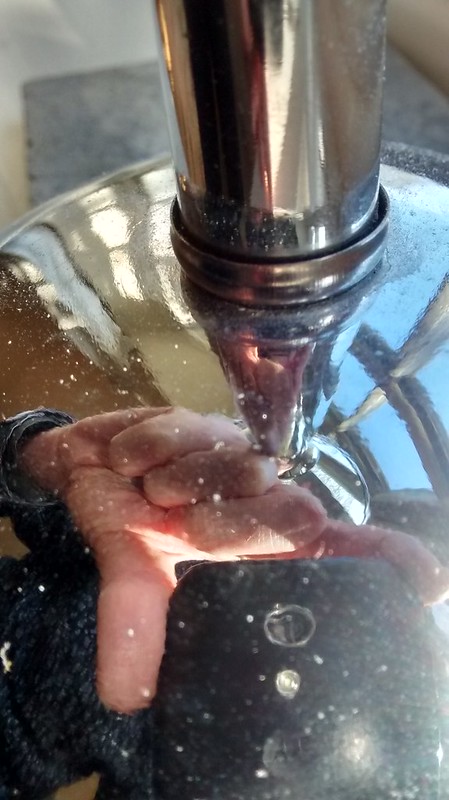 ‘representing a metaphor for complexity’ 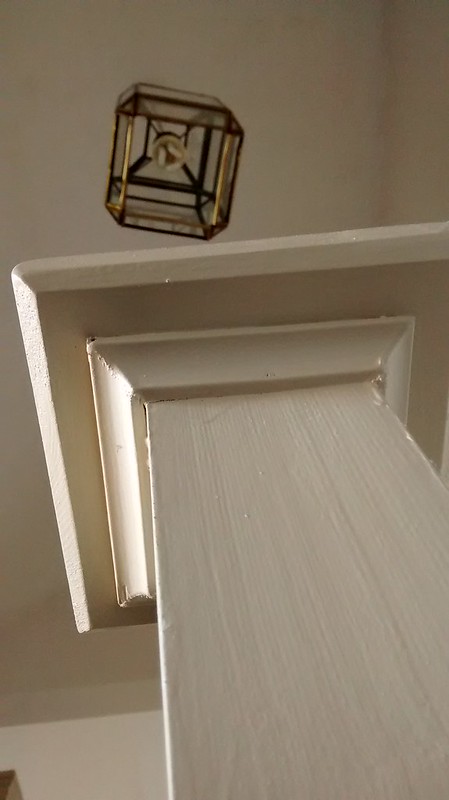 ‘something at an unusual angle’

I did spend quite a bit of time looking at other people’s photos on Flickr, but most often I couldn’t see how they fitted the rules of the exercise. The shots didn’t seem at all to fit the scope of the 15 minute rule – is there some hashtag liberty taking going on here?

Posted on February 9, 2015 by andrewclay

‘Create a surreal panorama by first making a panorama (duh), and then munipulating the photograph to make it out of this world. However, don’t go out and just make a panorama via your iPhone!!! Take some pictures and mash them together!’

So, dear reader, I mashed, in response to Visual Assignment 1330 ‘Surreal Panorama’ of the digital storytelling open course ds106:

This composite image began a few months ago with recent experiments with the panorama mode on my Android phone. It doesn’t always work – sometimes it just takes multiple individual photos rather than stitching multiple photos into a single panorama. But when it works, it can produce some very satisfying images:

I had in mind that for this assignment I would montage a few similar panoramic landscapes taken on Morecambe Bay in PowerPoint, cutting them up, slicing, copying, rotating, altering brightness and contrast, and so on to create something still recognisable as a landscape, but abstracted, more architectural, and pushing the over-exposure further: 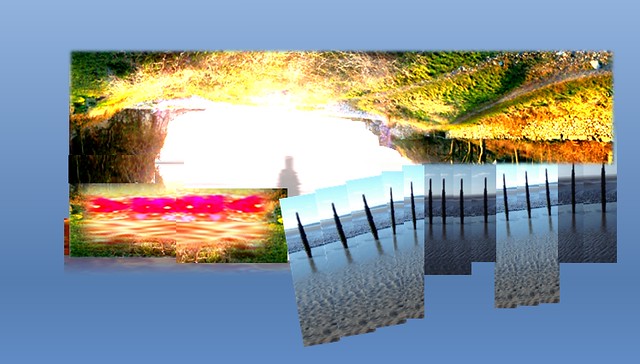 The earth is in the sky, but the in the darker contrast areas there is an attempt to make a bridge or perhaps a pier. I could have spent more time making it more fantastic or surreal, but there came a point when further manipulation seemed pointless. I couldn’t entirely eliminate the horizontal strip effect, but it has a certain amout of visual tension and patterning of the inverted earth-sky and the repeated posts that is OK. But I think that the original Android camera panoramas look more ‘dreamy’ and surreal than the mashed version. This one even has a glitch that suggests a parallel scene within a scene: 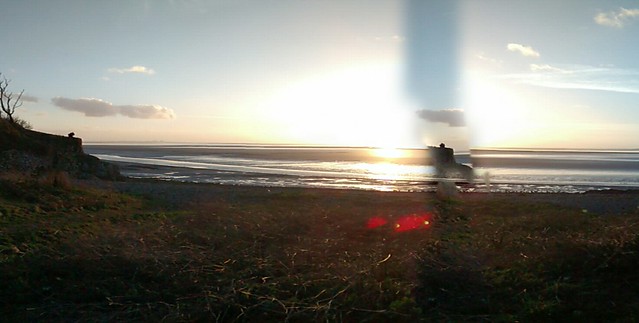 In the end, though, sometimes, as we well know, ‘good enough’ is good enough.

An adaptation of the ds106 Open Course for TECH2002

Creative attempts to "cut the mustard" in a digital world.

'Step Out The Box'

WordPress.com is the best place for your personal blog or business site.