No big game around Pershore, but plenty of charity shops and cafes to rummage around and be idle. So, out came the smartphone camera on alert for photo ops with a design focus. This ended up being a mixture of architecture, clothes, food and sweet packaging.

Sweet wrappers are generally bold in colour – probably garish in design terms, bad taste on the outside, godd taste (hopefully) on the inside. Lots and yellow and red, bright colours, overdosing on sweetness and colouring. And bold typography – inflated, shaped, loud. 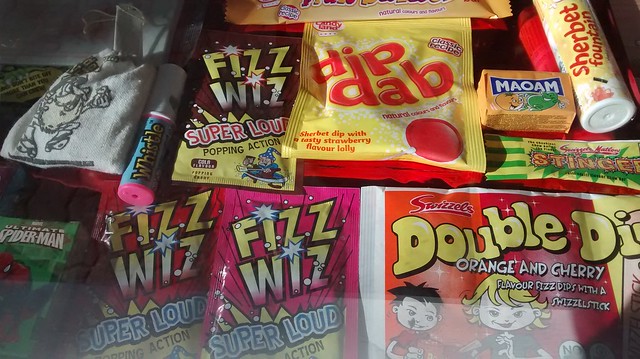 How many scones on a plate?

The answer is three. Trios – they just look better balanced than even numbers. Asymmetry at its tastiest – double stacked. 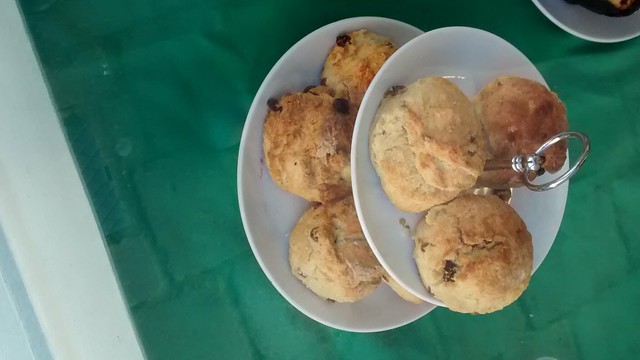 How many giant display figures outside the toy shop?

Two of course – otherwise there is no balance – they flank the door like guards. One figure would look like it was hanging around. One figure either side is guiding you in. 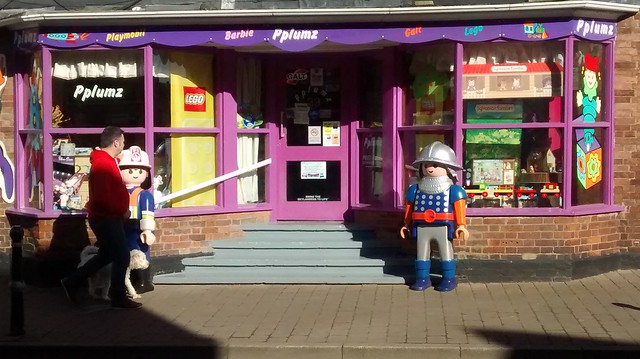 Classic architecture is symmetrical. It has proportion and symmetry. Victorian facade: 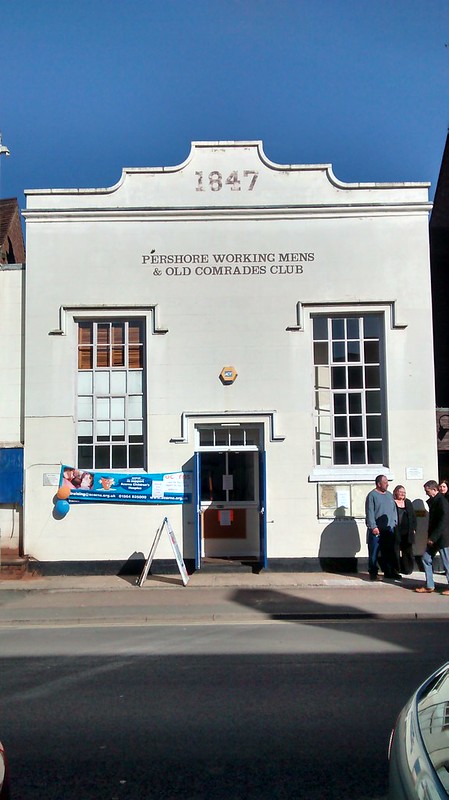 Pattern is often designed into our clothes and furnishings. The rhythm of pattern doesn’t always work, but when it does, it is very pleasing. Geometry,  whimsy and flowers. 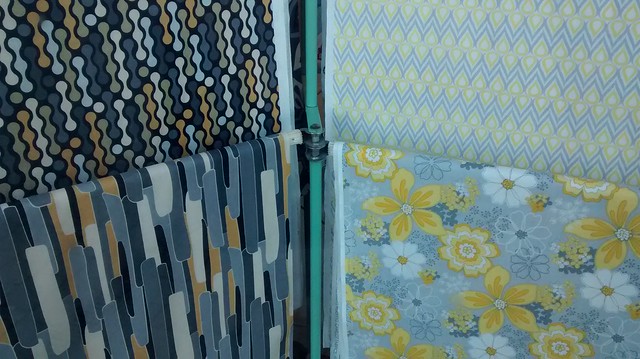 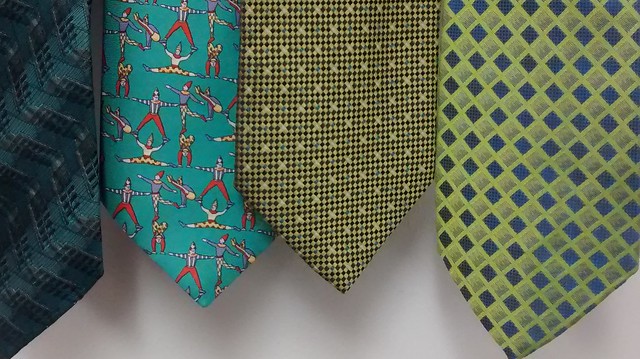 ‘But all things become visible when they are exposed by the light, for everything that becomes visible is light’ (Ephesians 5:13)

As an atheist, I’m using this religious reference as philosophy and about what we see. We see only the light of things, not the thing itself. So, with my death slab, you can touch something physical, and think about my ‘lightness’. The self-portraits were taken yesterday while playing with the sunlight of Spring through the blinds in my office. Totally unrelated to this task, but now related.

TDC1161 How music changed your life

If you could only have films or music, you would choose music, right?

You could listen to music and make films with your eyes.

Am I really only halfway through ds106? Some of these hours have been ‘Ira Glass’ hours, the rest just glass hours.

Hanging on in quiet desperation is the English way
The time is gone, the song is over, thought I’d something more to say

Four icons, one film, but which film? Answer and explanation here.

The assignment is to reduce a movie, story, or event into its basic elements, then take those visuals and reduce them further to simple icons, four of them (One Story / Four Icons)

Above is a classic film noir reduced to four icons, but which one?

The answer is revealed below, but if you want to guess, stop reading now.

The film represented above by four icons has so many iconic elements that it made it an easy choice for me. The first two icons are deliberately obscure, but the next two should be more easily identifiable since they are based on the stars of the film.

The first icon refers to the gas station of a small resort town (Bridgeport, California) where the hero (Jeff Bailey), a former private detective, is now making a new life. It was made in PowerPoint, as were all the icons, using a couple of basic shapes – a circle and a crescent to suggest 2D. The word ‘GAS’ was position so that the ‘S’ brakes the edge of the circle, creating a much more intersting icon.

The second icon refers to the $40,000 that the femme fatale in the story has taken from the gangster who wants her back. It was made using clip art hands and a dollar sign.

The next two icons are based on the stars of the film. The third icon represents the character Kathie Moffett played by Jane Greer the moment she enters a cantina in Acapulco, Mexico and is seen by Jeff Bailey. The film still was imported into Paint and painted over to create a silhouette framed under the doorway. A simple rounded rectangle was placed around the image with a repeating line of different thicknesses.

The final icon is another one painted from a film still of Jeff Bailey (Robert Mitchum).

The painted image just looked right in a triangle (an incomplete triangle balanced better) – as if protruding from the top of a martini glass – four icons, four different basic shapes, one great story, that ends badly, of course.

Create a propaganda poster for ds106. Use your photo editing software of choice and write a message to inspire your fellow ds106ers (DS106 Propaganda Posters)

Do my fellow ds106ers need inspiration and propaganda? Not sure that they do, but anyway, here goes – be inspired and propagandarised ds106ers!!

My immediate thought when it comes to war propaganda posters was to use something by Abram Games. He was one of the most talented poster designers of the 20th century. However, I couldn’t find a poster that was appropriate in sufficient resolution quality to use and so I carried on looking. I then found a series of interesting posters that were made for The Royal Society for the Prevention of Accidents (RoSPA) in a simialr modernist style. During World War 2, RoSPA produced a series of accident prevention posters aimed at workers in factories and workshops of the British war effort. In particular, I was drawn to the posters of Arnold Rothholz, who came to London in 1933 as a student. The one I chose is called  ‘No Room for Horse-Play Here’:

I copied the poster into PowerPoint and removed the text from the bottom of the poster. I added ‘ds106.us’ in white using the Playbill’ font and chose an orangey-red colour for the main message to match the colour of the door in the poster. I added ‘…’ to the ‘NO ROOM FOR HORSE-PLAY HERE’ text on the poster so that my own message could be added below. At first this additional message was ‘SO PLAY ONLINE!’, but ‘SO FOOL ONLINE!’ sounded much better so there wasn’t repetition of ‘play. SO, DS106ERS, GO FOOL ONLINE! OUR STORIES NEED FOOLS!

The concept for this design assignment came to mind immediately based on this scene from Citizen Kane (1941):

Cinematographer Gregg Toland pioneered a deep focus photography that enabled complex storytelling to be achieved in a single shot. In this part of the film, the parents of the young Charles Foster Kane are handing over supervison of the boy to a banker who will oversee his education and entry into a life of power and privilege using the proceeds from a gold mine found on the Kane property. It is a key scene on a number of levels. While the young Kane’s future is being discussed inside the house, we can see him playing happily outside oblivious of the new direction his life will take. Thus begins the problematic downside of his emotional impoverishment that will dog his use of power and wealth as an adult. Although we don’t know it at the time of this scene, Kane is also playing with the sled called ‘Rosebud’, Kane’s final word uttered before his death in the opening of the film and a mystery that drives the investigative plot. The sled, then, seen at the end of the film being destroyed deliberately as an unwanted and  lost possession of the dead Kane, is a powerful symbol of childhood contentment betrayed by parental insensitivity and (particularly a mother’s) ambition that we recall with new resonance from this earlier scene at the Kane home.

Therefore, the image of the boy Kane playing with Rosebud framed by the window is a good basis for creating an essential and minimalist motif for the film. The film still was imported into Paint and isolated by overpainting the rest of the image as background. The window motif was then copied into PowerPoint and arranged in portrait poster format with the window placed toward the top left of the poster creating a sense of some perspective depth. The font is Adobe Devanagari with serifs that hint at Kane’s position as a newspaper magnate. The title of the film was also placed along the vertical edge of the frame to also try to create a sense of depth and the font enlarged in the middle of the title to make it more figurative or architectural and to play around with the word ‘zen’ to associate kane with the idea of self-enlightenment. But, I decided that this was getting less and less minimalist and that the original colours chosen (light blue and sand) were inappropriately related to the beach:

Other colourways were tried:

And moving the position of the text and getting rid of the mixed font sizes to create a sense of deep focus:

In the minimalist spirit of ‘less is more’, the text was placed at the bottom and various colour combinations tried (using the ‘Format Picture’ Recolour tool):

So, this is the final version chosen (next to the original theatrical poster from 1941), but I no longer know which one is best, so you decide:

In the spirit of The Big Caption take any photo featured on The Big Picture and add typographical text elements in a way that changes the message. (The Big Caption)

Adding text to a photograph from news agency feeds can only go in one or two ways – politics and comedy – or maybe also funny politics. Having chosen this image showing a response to the Charlie Hebdo attrocities, when people took to the streets of Paris to demonstrate their solidarity with the victims, I wasted quite a bit of time thinking about a political caption that didn’t ‘change the message’ so much as underlined or added to it. I had not taken in the instruction properly and stumbled around with a paraphrase of Stephen Fry that was too complicated to play with.

So, I resorted to comedy.

For me, the attraction of the image is the man holding the massive pencil in the air. This made me think about a superhero, ‘Pencilman’. The obvious visual reference in the photograph is to Eugene Delacroix’s painting Liberty Leading the People (1830), and so the caption was designed in the style of an exhibition attribution plate fastened to the frame of a painting. The figure of ‘Liberty’ is simply imagined to be replaced by the less symbolic figure of ‘Pencilman’. The caption was built from shapes and textures in PowerPoint and exported as a JPG. On reflection, having the plate on the image rather than on the frame looks a bit awkward, but I like the jokey reference to the romantic revolutionary painting that the photograph resembles.

An adaptation of the ds106 Open Course for TECH2002

Creative attempts to "cut the mustard" in a digital world.

'Step Out The Box'

WordPress.com is the best place for your personal blog or business site.